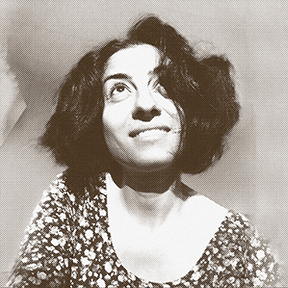 From having a job in digitally retouching photos, it inspired Maryam to start collecting photographs and negatives. Throughout the years, her collection grew to more than forty thousand negatives and photographs ranging from the 1940s to the 1980s. Her initial focus was women’s photographs embodied in artworks featuring drawings, printmaking, and oil on canvas, and was continuing these artworks ever since her bachelor’s degree.

Gradually, the works drew a link between photographs and Iran’s Contemporary History. The massive political protests started in 2009, known as the Green Movement, strengthened her interest in the issues that arose within contemporary Iran. This inspired her to research everything there is about Iran’s contemporary history and revolution art throughout her Masters. The painters were protesting through their art, leading up to the 1979 revolution, the government instrumentalised the terms revolutionary paintings for its own gain. Maryam attempted to clarify the term in art to better distinguish the pre-Islamic government paintings to the ones that came after the revolution.

With the rise of a new political movement, after the 2009 Iranian presidential election, she just could not remain a silent witness to the attacks that students were suffering, by a government trying to silence them. Fabricating an offstage identity, trying to avoid being arrested, Maryam shared various media in support of the opposition party’s protests, rebelling against censored platforms. Marya Ebrahim was born and this alias made her realise that true identity is itself an issue in Iranian women’s life. Adopting various personas was the way women have been dealing with the reality of Iranian patriarchy, which was a common and much somber issue. For ten years her art pieces gravitated around this set of issues.

Scroll back to top